He was born at Hillcrest Memorial Hospital in McLennan Country to Lisa Lozano and Antonio Vigil.

Mario graduated from Connally High School in 2003. He married the love of his life, Rita Nikola Lopez Vigil on November 10th, 2017 at St. Anthony Marie de Claret Catholic Church in Kyle, TX. Mario is a musician, producer and Grammy Award winning Tejano Star. He will always be remembered for his infectious sense of humor and uncanny ability to captivate those around him. His faith in God is profound and his hope was to encourage and inspire those to put God first in their lives.

Mario had a love for music that began when he started playing in church at the age of twelve. He became a Grammy Award winning artist at the age of twenty-three when he won best Tejano album in 2008 with Ruben Ramos and the Mexican Revolution. He was gifted with the ability to play bass guitar, keyboard, accordion, guitar, drums and the saxophone.

For all those who were inspired or impacted by his life we welcome you to come join us for his Memorial Service Sunday, February 9, from 2pm- 5pm at Harrell Funeral Home 1715 Kirby, Kyle, TX 78640.

"I have fought the good fight, I have finished the race, and I have kept the faith." 2 Timothy 4:7

Mario you will be missed by so many. I would like to thank you for giving our Nikki so much love. You guys have the sweetest true love story. I was honored to experience some of it. Rest In Peace

Mario had an impact in our industry and didn't have a clue. His passing has brought us to share memories pictures, and express how grateful we are for his contributions my thoughts and prayers are with his beloved wife Nikki. It was so apparent to see the love and respect respect they had for each other. He was a man of Christ. You could feel the anointing, when you were in the presence of Nikki and Mario. He kept his faith and spirit until the end of his battle. You will be dearly missed.

Mario my brother rest in peace. Never forgotten and will live forever through all of our memories of you.... Sending continued prayers of strength and guidance for your wife Nikki and your entire family. Once again RIP and jam out. Not good bye just see you later. Yvonne y Fuego and the entire Fuego family.

My sinsere condolences to Nicole, family and friends. May God give you all the strength today and the days ahead. 🙏

Hi I want to send my condolences to the family of MARIO VIGIL I'm a friend of Marios my name is Omar Aguinaga and a fan he was the greatest person you could ever meet I still can't believe this happen to the nicest person I live in Arlington Texas. I saw on New years Eve that Jay Perez was going to perform at New West club in Dallas Texas I was like I get to see my friend Mario it's been a couple years that I haven't seen him and when I didn't see him on stage I thought something ain't right he's either in another band or he's sick or got out of the music industry he was the greatest of what he did I'm going to miss Mario and I know he's in a better place with God and taking care of him I will see you again Mario in heaven may God bless your family and protect them I'll miss you Mario. And I wish the best for your wife and family R.I.P. Mario Vigil. 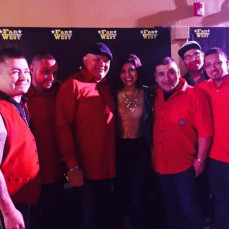 The attached photos are added to the memorial of Mario Michael-Angelo Vigil to help share their legacy.

Thank you for sharing your memory of Mario